A few months ago I was watching a TV program here in Australia called The Book Club (which is about exactly what the title suggests). On this particular episode a book was discussed that immediately piqued my interest and it took me all of two minutes to add it to my TBR on Goodreads. The book, If This Is A Man, by Primo Levi, details the author’s experiences in the death camp of Auschwitz during WWII, and although the content of the book appealed to me, it was the author himself who was the main drawcard, as by all accounts he was an incredible human being. I am yet to read If This Is A Man, but I have recently read two of his other books, and I’d like to share my thoughts about them. Reading his books is definitely a reading highlight for me this year. 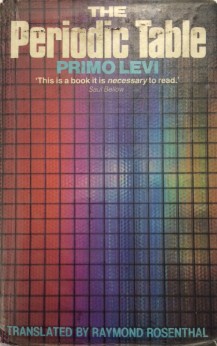 “The Periodic Table is largely a memoir of the years before and after Primo Levi’s transportation from his native Italy to Auschwitz as an anti-Facist partisan and a Jew.
It recounts, in clear, precise, unfailingly beautiful prose, the story of the Piedmontese Jewish community from which Levi came, of his years as a student and young chemist at the inception of the Second World War, and of his investigations into the nature of the material world. As such, it provides crucial links and backgrounds, both personal and intellectual, in the tremendous project of remembrance that is Levi’s gift to posterity. But far from being a prologue to his experience of the Holocaust, Levi’s masterpiece represents his most impassioned response to the events that engulfed him.
The Periodic Table celebrates the pleasures of love and friendship and the search for meaning, and stands as a monument to those things in us that are capable of resisting and enduring in the face of tyranny.” (Goodreads)

I’ve mentioned before in another post that I don’t “do” science. So reading a book that revolves around science and was actually voted The Best Science Book Ever (it’s a thing apparently), might have caused my brain to explode. Thankfully it didn’t and I am able to sit here and write this. While science – specifically the elements of the periodic table – are the keystone of this book, for the most part it is about life. The elements themselves merely serve as the inspiration for Primo’s memories in much the same way that scent reminds the rest of us of times gone by.

It is difficult to read this and not be profoundly touched. Within the pages of this book, are the memories of a man who has seen humanity at it’s worst, but can still remember it at it’s best. Primo’s ability to see inside people really shines through in his writing, but it’s the way he writes about himself that makes this such an intriguing read. By the end of it, I felt like I really knew him; so much so that I’m calling him by his first name in this post, rather than by his surname as I would when I usually discuss books.

There is happiness, sadness, anger, and peace in this book – it is about life, after all. But there are three moments in the book that dragged reality to the fore. Two of them I won’t go into to much detail about as I don’t want to spoil anything, but they happened after moments in the book that had me feeling elated, and then all of a sudden it felt like everything in the world was broken. The third moment takes place in the chapter titled ‘Vanadium’:

“To find myself, man to man, having a reckoning with one of the “others” had been my keenest and most constant desire since I had left the concentration camp.”

While there are plenty of stories about coming face to face with the tormenters of one’s past, Primo’s reflection upon it is unlike anything I’ve ever read. But in the end as he puts it, the man “was not the perfect antagonist: but, as is known, perfection belongs to narrated events, not to those we live” (p.215). The way I read it, is that no matter how much we may want something, the reality of it is never what we hope it will be.

“The essays in this book include some of the subjects that fascinated Primo Levi – the house he lived in all his life, butterflies and spiders, imaginary creatures dreamed up by children, Rabelais, writing a novel, returning to school at 60 and the need for fear. Throughout the book there are glimpses of long lost childhood summers, his grandparents, adolescence and, most importantly, his writing. The book, which is near to autobiographical of Levi’s post-Auschwitz years, conveys his conviction that though “we are living in an epoch rife with problems and perils, it is not boring”. (Goodreads)

I don’t even know what to say about this book. By the time I reached the end, I felt like Primo and I were old friends. Being able to read about things that have interested him and the his view on the world made the whole reading experience very personal. In fact, I would go so far as to say that I wasn’t reading so much as I was getting to know someone.

Although Other People’s Trades was published thirty years ago (is it too much for me to think it serendipitous that this was published in the year of my birth?), with some of the essays originally published more than a decade prior to that, you can’t read this and not see our current society reflected. Of particular note are his reflections on how wasteful technology can be. In modern times it is the black hole otherwise known as the Internet, full of cats and people doing stupid things. In Primo’s time, it was his new word processor with inbuilt games (like chess):

“I did not want any games: I can produce trustworthy witnesses. I have owned a word processor for a whole year now; it has almost become part of my body, as happens with shoes, glasses, or dentures; I absolutely need it to write and file; but I did not want it to take me over, and so I did not want to let frivolous programmes into the house. The computer was supposed to be used for work, and that’s all. Instead the unforeseeable (or foreseeable) took place, I have received the gift of a programme for chess playing and have yielded to the sedcution.”

I especially enjoyed reading his thoughts on being a writer, and I think anyone who has had even the smallest thought of making a profession out of writing would benefit greatly from his thoughts on the matter. Even those who already consider it their profession would gain something.

Literature, science, the natural world, the man-made world: none escape the sight of Primo Levi. This book shows a man who was curious about everything around him and is honest in his assessment of things – and himself. I know there are books often described as having something for everyone, but this is genuinely one of those books. If you’ve ever had an interest in anything, then you should give Other People’s Trades a go; you’ll come away from it feeling enlightened and maybe a little bit better about your procrastination habits.