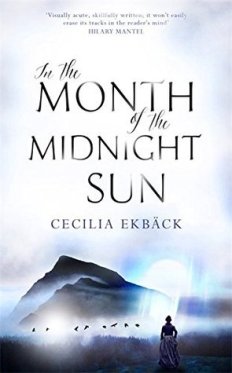 “Stockholm 1856.
Magnus is a geologist. When the Minister sends him to survey the distant but strategically vital Lapland region around Blackåsen Mountain, it is a perfect cover for another mission: Magnus must investigate why one of the nomadic Sami people, native to the region, has apparently slaughtered in cold blood a priest, a law officer and a settler in their rectory.
Is there some bigger threat afoot? Blackåsen seems to be a place of many secrets.
But the Minister has more than a professional tie to Magnus, and at the last moment, he adds another responsibility. Disgusted by the wayward behaviour of his daughter Lovisa – Magnus’s sister-in law – the Minister demands that Magnus take her with him on his arduous journey.” (Hodder & Stoughton)

I had a strange time reading this book. On the one hand I appreciated the themes thread through it: women having little choice in their lives; the destruction of native culture; the destruction of land; and the idea that the past is never really in the past. On the other hand, I found it difficult to engage with the writing and my enjoyment of the book suffered because of it.

My first big issue was the narration from three (sort of four) first-person perspectives: Magnus, Lovisa, and a Lapp woman, Biijá. I have no issue with this in the grand scheme of things, providing it’s done well and each narrator has their own distinct voice. I thought utilising these three in particular to tell the story was excellent, as their life experiences would have been very different. As a man, Magnus would have had it relatively easy; Lovisa is a rebellious young woman who feels oppressed by the patriarchy (which she was); and Biijá is the native woman who watches the past of her people destroyed, but also its future, through the introduction of Christianity:

“Nila was our mapmaker, the keeper of our memories, of our legends, and he was the last one. Never again will our people have a noiade [shaman]. Without him we have no past.”

But none of the characters had their own, distinct sounding voice. At the beginning of each chapter, there would be a letter at the top to show who was speaking (‘M’ for Magnus etc.), but I found that if I didn’t pay attention to that, then I couldn’t tell who was narrating as they all sounded the same. So I think the idea of this was good, but could have been executed better.

I also found the book loaded down with short, sharp sentences that didn’t allow the storyline to flow. There were very few longer passages and when there were some longer sentences they were broken up with unneeded and oddly placed commas that, again, didn’t allow the sentences to flow. I put this down to some poor editing in the later stages, as I even found a couple of paragraphs that were almost word for word, one after the other. Obviously one of them should have been taken out after a rewrite but wasn’t. I can forgive a couple of punctuation errors here and there, but this is a pretty big error and I have to wonder whether the editing was rushed in order to get the book out while Ekbäck’s previous novel, Wolf Winter, was still fresh on everyone’s mind.

Having said all of that, it wasn’t an unenjoyable read. The one thing that kept me going was the fact that there was a mystery to be solved. There were a few different plot threads, but it wasn’t overly tangled so it wasn’t a difficult book to read. And every now and then there’d be a sentence that was so beautiful that I was almost able to forgive the book for everything else I didn’t like about it. They were usually sentences that perfectly captured the places that are so far north the sun barely has time to set before it rises again:

“I stand for a long time by the window, in this silver evening that won’t end. What a delight to live with days that merely mellow before growing again into full days.”

I didn’t have a great time reading this, and I didn’t have a horrible time – I’m certainly not put off reading any more books by Ekbäck. The best word I can think of to describe it is ‘sufficient’. It’s a perfectly sufficient read that, if you aren’t looking too hard for issues (maybe I’m just being picky with it?), would make for some easy reading in your downtime.