IT’S OCTOBER. That’s all I’ll say about how fast the year is going.

September was kind of a blur. I spent the first two weeks of the month on leave and I think not paying attention to the date for those two weeks made the month go by that much quicker. But it was still a reasonably productive month. I got the internet situation sorted in my new house, had some furniture delivered, got my little garden sorted, caught up on a bunch of NetGalley reviews, and just generally had a nice time.

Some reading things from September: 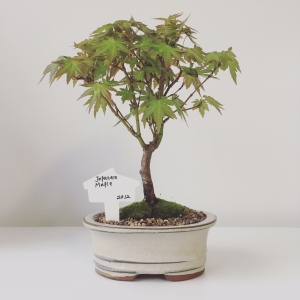 I also got a new bonsai. This is the second one I’ve bought this year (the first one all the way back in April AND IT’S STILL ALIVE) and it’s just the most beautiful little thing. It’s as Japanese Maple so if I can keep it going until autumn I might get to see it looking like this.

I don’t have any big plans for October aside from spending the first weekend of it eating and watching tv (the grand finals of two of Australia’s major football codes fall are both on this weekend which is basically amazing). It’s a long weekend as well so go Australia. For the rest of the month I have zero plans. I’m sure it’ll be great.

Did you read anything good in September? Any big plans for October?