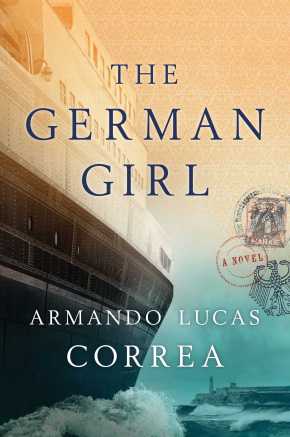 “Before everything changed, Hannah Rosenthal lived a charmed life. But now the streets of Berlin are draped in swastikas and Hannah is no longer welcome in the places she once considered home.
A glimmer of hope appears in the shape of the St Louis, a transatlantic liner that promises Jews safe passage to Cuba. The Rosenthals sell everything to fund visas and tickets. At first the liner feels like luxury, but as they travel the circumstances of war change, and it soon becomes their prison.
Seven decades later in New York, on her twelfth birthday Anna Rosen receives a package from Hannah, the great-aunt she never met but who raised her deceased father. Anna and her mother immediately travel to Cuba to meet this elderly relative, and for the first time Hannah tells them the untold story of her voyage on the St Louis.”
(Simon & Schuster)

First, here’s a couple of reasons you should read this:

The German Girl is a fictionalised retelling surrounding the true events of the St Louis, a ship that carried Jewish refugees from Europe to Cuba before the outbreak of WWII. I feel like I should give a quick rundown of what happened to the St. Louis, but it might be a bit spoilery for the book if, like me, you know nothing at all about it. So if you want to know more about it, I’d highly recommend going here and reading all about the voyage of the St. Louis.

Armando Lucas Correa uses the lives of two 11-year-old girls to tell the story: Hannah, who we follow from 1939 Berlin, through to her time on board the St. Louis, and then in Havana; and Anna living in New York in 2014, who eventually ends up in Havana also. The narrative alternates between the two throughout the entire book; and while the back and forth between past and present has irritated me in the past, particularly in regards to those books that could be classed as romantic historical fiction – it just feels like it’s been done to death. But it didn’t feel tedious in The German Girl, and it wasn’t used to point out parallels between two characters that are separated by decades or centuries – there are parallels certainly, but it didn’t seem like the point of the narrative structure was to point them out. It was just two stories, running side by side and eventually meeting.

Correa has worked as a journalist for more than 30 years, so the detail in the novel is incredible and really supports the fictional characters. The contrast between the grey feeling of Berlin and the heat of Havana was lovely to read, while the scenes on board the St Louis had a sense of hopeful unreality about them.I had some issues with the translation as there were a couple of places here and there where the Spanish to English maybe wasn’t done as well as it could have been. It didn’t mean that I missed out on anything plot-wise, but these moments were a little bit jarring and pulled me away from what is otherwise a beautifully written book. I especially appreciated the author’s note at the end, in which Correa writes about the journey of the St. Louis, and includes the passenger manifest along with some photographs of the passengers.

It was difficult not to be affected by the things that happen to the characters in The German Girl – especially to Hannah and her family. It’s been a while since I cried so much at the end of a book, so maybe don’t read the final chapters in public like I did (or at least make sure you have tissues). Be prepared for a book that isn’t an easy ride, but that you’ll be glad to have read in the end.