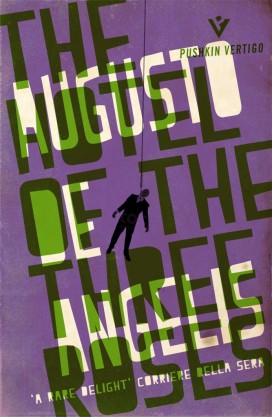 The Hotel of the Three Roses (Commissario De Vincenzi #7)

The shady Hotel of the Three Roses is home to an assortment of drunks and degenerates. Inspector De Vincenzi receives an anonymous letter, warning him of an imminent outrage at the guest house, and shortly after a macabre discovery is made–a body is found hanging in the hotel’s stairwell. As De Vincenzi investigates, more deaths follow, until he finally uncovers a gothic and grotesque story linking the Three Rose’s unhappy residents to each other. (Pushkin Press)

This is the second book I’ve read in the ‘Inspector De Vincenzi series (the first was The Murdered Banker, I wrote about it here) and this reading experience was almost as enjoyable as the first. As with The Murdered Banker, it was fast paced with all the events taking place in the space of one night, and this made an already fast read even faster. There’s nothing worse than having to plod through hundreds of filler pages in order to reach the denouement.

I found it to be much darker than the first Inspector De Vincenzi book I read and it was probably the setting that did it. Aside from the hotel having a Gothic feel to it, the mind of De Vincenzi himself seemed to be a darker place:

“A mirror is always ready to pick up any shimmer from the surrounding environment. Now, he too was living in that mirror—and he didn’t know it. A mirror was a terrible witness. That one there had spied on him, taken his person too, and reflected his image into the darkness of the room where a rosy doll leant her shoulders against the pillows, her legs twisted at the knees…”

But probably the biggest difference between the two books, is that there were a lot more characters to keep track of this time.  While there was only a handful of suspects in The Murdered Banker, this time around there is an entire boutique hotel full of them. As there isn’t a lot of time spent with each individual character, it made it a little difficult at times to distinguish between them – especially two of the female characters. In this instance I think the action of the story was too quick for the amount of characters to introduce and scrutinise, while also building a back story to the crime itself AND attempting to solve the crime.

Despite this, it was still a fun read with no clear answer to whodunit until right at the end. If you’re after a quick mystery then definitely give this one a go.

Many thanks to Pushkin Press and NetGalley for providing me with a review copy.