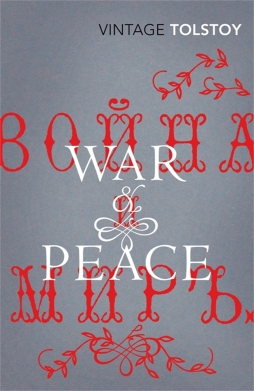 Teaser Tuesdays is a weekly bookish meme, hosted by A Daily Rhythm. Anyone can play along! All you have to do is grab the book you’re currently reading, open to a random page and share two sentences from that page. But make sure you don’t share any spoilers!

The BBC adaptation of Leo Tolstoy’s War and Peace finally hit the TV here in Australia on Sunday night and WOW WAS IT AMAZING. Seriously. AMAZING. I think the best thing was how true it stayed to the book (aside from a couple of minor things), and how perfect the casting was (Paul Dano as Pierre is all of my dreams come true and I know everyone loves Prince Andrei and sure he’s good looking, but Pierre you guys. Pierre.), and the costumes, and the camera work and I could sit here all day raving about it but I won’t because I need to talk about the book!

I started out on a reread of the book last week. The biggest surprise so far is how much better it is than last time I read it. I probably first read it around eight years ago when I was in my early 20s. It was good but  back then I probably picked it up just so I could say I’d read it. My reading tastes have expanded and changed so much since then and I can now sit here and honestly say to you that it has well and truly surpassed my expectations of it so far and I’m actually enjoying it. I’m finding humour where I didn’t find it before, it’s less bleak than I’d remembered, and I have a greater appreciation for Tolstoy himself.

I know lots of people are put off by the length of this book and you really do need to persevere with it (and maybe get a massage after lugging it around everywhere with you), but it really is worth taking the time. Hopefully the teaser sentences below will encourage you to be less scared of it! I’m being a cheat this week and sharing three short sentences (such a rebel):

“Pierre had not managed to choose a career for himself in Petersburg, and had indeed been banished to Moscow for riotous behaviour. The story told at Count Rostov’s was true. Pierre had taken part in tying the policeman to the bear.”

What are you reading this week?